When the puck sat motionless behind Fleury for what seemed like forever and a day, with no one seeming to notice (except for the referee), the defining moment of the entire Stanley Cup Finals existed in those few brief moments. Down 2-1 midway through the 3rd period, Henrik Zetterberg sent a wrist shot toward “The Flower” (who was my pick for the Conn Smythe had the Pens won) and he gobbled it up like so many before. Everyone gathered around and the play seemed to stop… only a whistle was not forthcoming. Strange… but let’s back up for a moment. 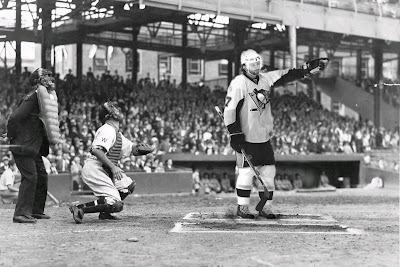 Just roughly 38 hours before this defining moment, Petr Sykora made good on his declaration that he would take the puck and score, calling his shot ala Babe Ruth (when performance enhancers in sports meant a hot dog and a blow job). Sykora’s wrist shot brushed goaltender Osgood’s left sleeve and ended one of the greatest games in NHL history. Fleury played one for the ages, with 55 saves (24 in the 3 OT periods) and produced his own defining moment where he silenced his critics and proved once and for all that he was an elite goaltender and worthy of being only the 3rd net minder taken 1st overall in the history of the NHL draft. Sykora, an off-season acquisition, had a wonderful season, reaping the benefits of playing with “Geno” Malkin and aiding Malkin in a season that most didn’t think he had in him.

When Sykora blew the puck past Osgood and sent the series back to Pittsburgh, most reasonable fans still had hope but knew that they were still facing an uphill battle. How could fans feel otherwise? With the exception of Fleury, the Pens were overmatched and outplayed in every aspect of the game, every game this series. They may have scored more goals in two games, but that hangs squarely on Detroit. Therein was out-coached. Crosby was held in check. Malkin was asleep. The defense was always falling back. Shots were passed up for the “pretty play.” Players were slow to the puck, couldn’t handle the puck, couldn’t make crisp passes and didn’t push the action into the offensive zone. Instead, they were content to dump and chase. When that didn’t work, they did it some more, showing me that Therein was stubborn and unwavering. Again, I love the coach, but he needed to realize that the game the Pens usually play may have got them there, but it wouldn’t work against a team that was designed to stop that type of play.

So, for the Pens to make a series out of this series was remarkable. After all, when all of these things are against your team and you still win 2 games, it’s pretty incredible. Nothing, however, was more incredible then the performance of hometown hero, Ryan Malone. Playing with a broken nose is one thing, as many players do it in this, the sport with the toughest athletes in the world, but to take a puck to that broken nose and return 20 minutes later and resume a high level of play is amazing. I am so proud to root for a player and team that sports such tough, determined people, including a fellow Pittsburgher no less.

It was a great season, filled with dominating play and surprising twists and turns. Thinking back to when Crosby and Fleury were hurt, nobody could have imagined that we would have been playing for the cup. In the end, we just didn’t have what it took, but we need to take from this the things that we learned so that we can gain the experience that Detroit had in abundance. It was a terrific run, but all good things must come to an end.

Who Is Olli Maatta And Why Is He So Awesome?

Keith Olbermann – A Letter I Sent Him

The Heat of the Moment

0 thoughts on “All Good Things…”