Who Is Olli Maatta And Why Is He So Awesome? 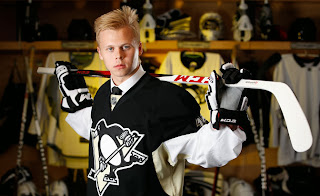 Olli Maatta is a rookie.

Taken by the Penguins with their 2nd pick (22nd overall) in the 1st round of the 2012 Entry Draft, one may think that Derrick Pouliot (8th overall) would be the player getting first crack at the NHL. Watching Maatta play, however, will quell that thought.

Maatta could have been taken by the Pens in that 8th spot and nobody would have batted an eye. He was certainly a highly touted prospect coming out of Juniors and was a steal later in the 1st round.

A native of Finland, he played for his hometown team in the SM-liiga, the Finnish Elite League, beginning at the age of 14. He was a point-per-game player on the under-16 team, and was rewarded with an early call up to the under-18 team. His success on that team was rewarded with another call up to the under-20 team. His stints on those teams were short, but it showed that coaches saw his talent. Maatta also played on Finland’s under-16 national team, where he posted 13 points in 13 games.

At the age of 16, he played only one game for the under-18 team before being promoted to the under-20 team, with whom he won the championship. He also became the youngest player ever to play on Finland’s World Junior Team.

In 2011, Maatta was drafted 85th overall by SKA St. Petersberg of the KHL and 1st overall by the London Knights in the CHL Import Draft. He chose to play in Canada and the OHL.

That season, Maatta helped the Knights to the best record in the OHL and the top defensive ranking in the league. He was a +25 and had 32 points in 58 games. In the playoffs, he led the team in scoring with 23 points in 19 games – as a defensemen – and the London Knights won the J. Ross Robertson Cup.

The next season, the London Knights and Maatta performed well, reaching the championship series and once again winning it.  Maatta posted a +9 and had 38 points in 57 games.

Now, Maatta is playing in the NHL. He played well in training camp and the preseason.However, in the regular season, he is showing his worth. While he still makes rookie mistakes, he often makes up for them immediately. He plays with speed and is very smart in his puck movement.  He has of course not reached his full potential, but the mental aspects of the game are sharp; well beyond that of a 19 year old.

Maatta is getting his shot because Kris Letang is injured, but he has played well enough to earn a regular spot with the team.  He’s NHL ready and has more to offer than say, Deryk Engelland.  However, do the Pens wish to start the clock on his contract now?  After 9 games, the Pens will have to decide to either begin the first year of Maatta’s contract or return him to juniors and basically keep that contract year.

If the Pens decide to keep Maatta with the team (and there are indications that they will – HERE), they would have another decision to make before he plays 40 games.  That’s the mark that an “accrued season” is registered in terms of Free Agency.

Olli Maata is a rookie.

(P.S. Today is my birthday and I’m very pleased to be able to spend it with you.  Thanks for reading!)

Quotes for the Soul

Keith Olbermann – A Letter I Sent Him

0 thoughts on “Who Is Olli Maatta And Why Is He So Awesome?”